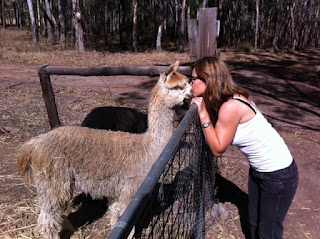 Home is where the Alpacas are - sometimes...

A couple of weeks ago I made a flying visit to my home state of South Australia for an author chat at the Clare Valley Library. At the same time I visited dad at our family property, Wuthering Heights, just 6km North of Clare, a B&B amidst 80acres of trees and hills set among the valley's vineyards. Here I am with the family alpacas.

Now I'm back home again and there's lots to keep busy with. I'm nearly finished my work in progress featuring a sweet, neglected viscount's wife and the handsome younger man with whom she falls in love.

There's also a fun competition being held at The Romance Reviews  http://www.theromancereviews.com/event.php. in which my latest sensual Regency Historical Rakes Honour is up for grabs if you answer one easy question.


Now it's time for bed. My lovely husband is watching a Norwegian thriller on TV while I think it's time for me to finish the excellent Monica McInerny 'At Home with the Templetons'. She was a local Clare Valley girl, growing up near us, and so I thought it was high time I read one of her books. I'm loving it!
Posted by Beverley Eikli aka Beverley Oakley at 4:10 AM No comments:

It's been a busy but a thoroughly enjoyable ten days hosting old friends, Pat and Mark, from Lesotho. I was a small girl growing up with their son, Julian, and it's been so fun to cover the decades and countries we've lived in since then. My mother and Pat were great friends.

Each day now I'm anticipating the cover art for my next two releases: Lady Lovett's Little Dilemma and my anthology story The Cavalier. July 2 and July 16 are the release dates.


Rake's Honour has also received only 5-Star reviews (three of them) so its reception has been really pleasing. It's not yet listed on Amazon.

And so a new week begins and its back to making sandwiches and making sure school hats are not forgotten and homework is done on time. And lights are out by 9.30pm meaning I must go now.

Posted by Beverley Eikli aka Beverley Oakley at 4:10 AM No comments:

Promo - Too Little or Too Much

While I now have two author names I reasoned I wouldn't have to do twice as much promo. Besides, how much is too much, and how much does it really count?

For three years I've promoted my lavish hardcovers, published by Robert Hale, with author talks and interviews and a bit of blogging. The books were acquired by a number of libraries, and expensive in Australia, so I chose to ignore popular romance sites on the web to promote them.

Since then, I've been working overtime to promote both of them. That's meant, often, two different author pages on many sites. I've kept my picture and bio the same but the heat level of each is different - though the level of plot and intrigue is similar. I don't want one of my traditional readers of a Beverley Eikli to find themselves blushing at a Beverley Oakley.

My stories are about women, trapped by convention in a man's world, trying to follow their dreams. Sometimes my heroines are feisty - such as Fanny Brightwell as in Rake's Honour;  sometimes they've had the fire knocked out of them by abusive and drunken husbands - such as Olivia in Lady Farquhar's Butterfly; or sometimes they're still desperately in love with their husbands but don't know how to navigate the matter of procreation - or minimising it - as is the case with Cressida - in my July 2 release Lady Lovett's Little Dilemma - who has five children by the age of 25.

So I've been blogging, advertising with The Romance Studio, The Romance Reviews, Night Owl Reviews, updating my bio with Amazon. I've even tweeted a little (@BeverleyOakley), though I'm still learning the ropes.

Will it make a difference?

Well, I'm learning a lot, both about the process and other writers and their work so that's not a bad thing.

As for the decision to take a pseudonym... only time will tell whether I've made a rod for my own back.
Posted by Beverley Eikli aka Beverley Oakley at 10:12 PM No comments: