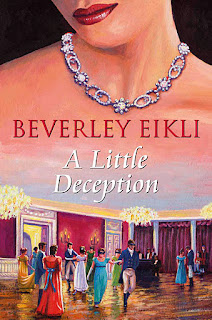 My ARRA Nomination - a huge thank you!

What a surprise that it was for A Little Deception which has received such mixed reviews. It shows you that not everyone likes the same things as the first few reviews I read were just heartbreaking! This nomination more than makes up for it.

A spontaneous trip to country South Australia (via the Renmark Big 4 caravan park with the kids) meant I was out of cyber contact for nearly 10 days so I've not responded as I should have but I've just booked my flight to Sydney for the ARRA awards dinner. (Not that I harbour any illusions that I'll win but it will be fun to catch up with my writing friends.) And since I can hop over on staff travel I might as well!

www.beverleyeikli.com
Posted by Beverley Eikli aka Beverley Oakley at 2:26 AM No comments:

Diving into the world of e-publishing

January is an exciting month as I make my first foray into e-publishing.

Within a few days of each other I've had Lady Farquhar’s Butterfly   re-released by Hale as an e-book. This was followed by my first Total-e-Bound release, a much hotter, shorter Regency Romance about revenge and one-upmanship with a sting in its tail -  Rake’s Honour.


You can read about both stories - and a bit about me - in my interview at http://downunderdivas.wordpress.com/ 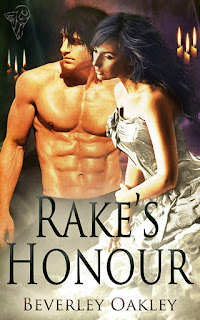 Similarly, many of the editors to whom I sent the completed manuscript thought that desperate, designing Fanny Brightwell was too unsympathetic. So Fanny languished in a drawer, neglected but not forgotten.
Finally, I decided it was time to return to Fanny and make sure readers understood her perspective. After all, if your ambitious mama is all but forcing you to marry a loathsome old man covered in ulcerous sores to save the family from financial ruin, you’re going to take some big risks to snare a more desirable husband.
Unfortunately, Fanny’s plan backfires when Viscount Fenton, the man who turns her insides to jelly, wants her to be his mistress not his wife. This is when Fanny decides it’s time to take the reins and teach her viscount a lesson.
All in all, Rake’s Honour is a viperish little story of love, revenge and one-upmanship with a sting in its tail. 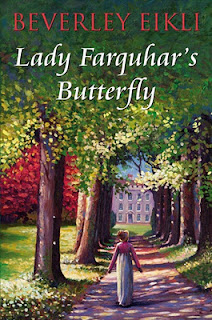 So while Rake's Honour comes with lots of baggage, so does the heroine of Lady Farquhar’s Butterfly   Olivia, Lady Farquhar. Poor Olivia is no less desperate as she's been stripped of her son by her drink-sodden late husband in his will. Lucien, Lord Farquhar has falsely declared Olivia an unfaithful wife and sent the infant to live with a distant cousin. A lot of Olivia's former spirit has been worn down by the abusive Lucien and when she arrives under a false name to work her way into Max's affections in an attempt to win back her child, more problems arise than she could have imagined.
January has started well. TEB has also contracted two other books and I'm looking forward to a July 2 release and a date to be determined for an English Civil War tale of thwarted passion.
Now it's back to working on my dad's 80th birthday present: a book of his memoirs with photographs from his time as a district commissioner in Lesotho in the 1960s and youth in Botswana  before that. There'll also be stories of his dad's trek throughout the Okavango around 1916-24 when he was a very young administrative officer and later DC, together with lots of pictures from his photo albums.
I'm just trying out this new took - Blurb - which has proved fantastic - and time consuming as I have so many photographs and they're not ordered as well as they could be. I want to include the hundreds of ageing sepias taking from the 1916 - 24 albums, which dad has had scans, as well as his scanned slides from the ten years he spend in Lesotho, where I was born.
These places will feature in upcoming stories and dad and I are collaborating on a 1960-set illicit diamond smuggling story set in Mokhotlong where was DC. I'm currently learning all about Colonial life in this tiny mountain outpost and it's fascinating.
I had very adventurous forebears.

Posted by Beverley Eikli aka Beverley Oakley at 1:26 PM No comments:

My blog about New Year's Resolutions at Tote Bags n' Blogs on December 30th whipped up the inspiration and forced me to plot out the following year's writing and writing-associated plans.

The latter, for me, means promotion. I'm not good at promotion and yet I've been marketing the family B&B in South Australia's Clare Valley - www.wutheringheights.com.au - for years.

No, I'd rather be writing the next book!

However, things change and with three e-releases in the next six months (including under my Beverley Oakley pseudonym) my books will become much more accessible to the public, both price-wise and physically.

Previously, my lovely UK-published hardcovers were primarily acquired by libraries with prices in Australia that made it difficult for them to compete with their cheaper counterparts.

Now my favourite book, Lady Farquhar's Butterfly, which came out last year in Large Print, is being published as an e-book by Hale. I just wish I had a link for it. Mysteriously, it's disappeared into the ether, though its release date was three days ago.

I also have a completed Regency Historical (called The Reluctant Wife and which is not erotic) which Musa has requested after seeing the partial but which got sidelined after Total-e-bound accepted Rake's Honour and Lady Lovett's Little Dilemma (due for release on July 2, 2012). My husband's careful critiquing of The Reluctant Wife has laid bare a major character flaw on the heroine's part - she's not sympathetic enough - so poor old Emily McCartney requires a lot of remedial work. Nevertheless, I'd say any woman forced to marry a man she doesn't know in order to legitimise the unborn child of her dead fiancé, only to lose the baby within weeks, has a big cross to bear and we should all cut her some slack.

Then there's the first draft of another Beverley Eikli Regency Historical as well as 30,000 words of my my 1960's-set illicit diamond smuggling story in the African Kingdom of Lesotho (where I spent my first years) written in collaboration with my 80-year-old father.

Anyway, I intend to blog every Monday, transferring my blog from my website to my Blogger site, here.

I'll talk about the books under my Beverley Eikli name as well as my Beverley Oakley name, though I'll have two separate websites (www.beverleyeikli.com and www.beverleyoakley.com) with excerpts of my forthcoming books on each respective site.

In the meantime, Happy New Year and may at least 50 per cent of your New Year's Resolutions be realised. If I'm needing inspiration I need look no further than my husband whose resolution last year was to lose weight. This year he tipped the scales at 23kg less than he weighed last New Year! So well done, Eivind (whose command slot on the 737 has just come up!!!).
Posted by Beverley Eikli aka Beverley Oakley at 2:32 PM No comments: