Winner of the Choc Lit Search for an Australian Star competition 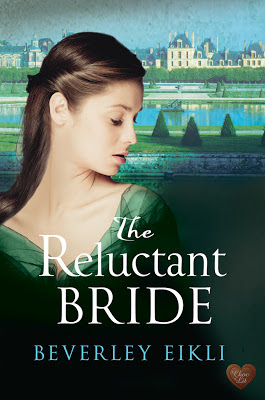 Emily Micklen is proud, passionate – and left with no option after the death of her loving fiancé, Jack, but to marry the scarred, taciturn, soldier who needs to secure a well-connected wife.

Major Angus McCartney hopes that marriage to the unobtainable beauty whose confident gaze about the ballroom once failed to register his presence will offer both of them a chance to put the past to rest.

Emily’s determination to be faithful to Jack’s memory is matched only by Angus’s desire to win her with honour and action. Sent to France on a mission of national security, Angus discovers how deeply Emily has been duped, but the secrets he uncovers lead them both into danger. Can Angus and Emily unmask the real conspirators before they lose everything? 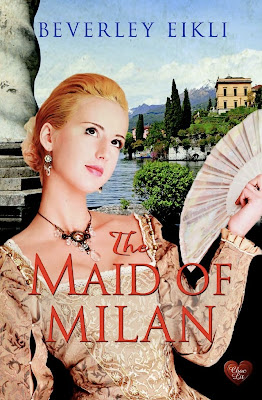 The Maid of Milan
Blurb

THE MAID OF MILAN
After three years of marriage, Adelaide has fallen in love with the handsome, honourable husband who nurtured her through her darkest hours.
Now Adelaide’s former lover, the passionate poet from whose arms she was torn by her family during their illicit liaison in Milan six years previously has returned, a celebrity due to the success of his book The Maid of Milan.
High society is as desperate to discover the identity of his ‘muse’ as Adelaide is to protect her newfound love and her husband’s political career.
If only the men had not been childhood friends.

The story starts when Adelaide is three years into what has become a happy marriage. She’s thoughtful and matured and very different from the passionate, flighty adolescent she was when she embarked upon an affair with the man married to her mother’s acolyte.
Adelaide’s mother – who lives with her daughter and son-in-law - is a do-good reformer whose sole mission is to improve the lot of female prisoners. The irony is that there is no greater prisoner than her own daughter.
EXTRACT
Chapter Four

A week in her great-aunt’s tiny cottage in Lincolnshire was enough to try the nerves of a saint – and Adelaide didn’t need her mother to remind her she was no saint.
‘That was the worst week of my life, Mama!’ she declared as they crested the final hill and saw majestic Deer Park in the distance. ‘Aunt Gwendolyn wanted me to be her slave. She’d have had me stay forever to mash her food for her, if she could.’
‘A more dutiful girl might have done it, too, Adelaide.’ The censure in her mother’s tone should not have hurt as much as it did. ‘You were never cut out for hard work, my dear. Thank the Lord Tristan treats you like a porcelain doll for I don’t know where else in the world you’d be looked after so well.’
She might have added ‘for so undeserving a girl’. Adelaide had heard it before but then she was now three years into her marriage and the term had perhaps grown stale.
‘I was a dutiful daughter, Mama, when I visited all those prisoners with you in Vienna,’ she reminded her. ‘For years I was at your beck and call, making notes on their conditions, asking them—’
‘You can act a part, Adelaide, and for that we should both be grateful.’ Her mother sniffed. ‘Sadly, the desire to make a difference in the world did not spring naturally from your passionate and selfish nature. At least you’ve managed to hide the truth of what you are from your husband or I can’t think where we’d be.’
It was impossible to conceal the bitterness engendered by her mother’s damning character appraisal. Adelaide leaned into the squabs and turned her head. ‘You should have had Hortense for a daughter,’ she muttered.
‘We cannot change our lot in life, Adelaide. It was God’s Will I make you a better person, for clearly you were born in sin. I tried to curb your wilful ways from childhood. Lord knows, you were the worst behaved girl at Miss Wilkins’ Seminary.’ She barely paused before driving the blade deeper. ‘When we make rash and foolish decisions we live with the consequences and that is the lesson you are still learning. Hortense was passionate about furthering the opportunities and consequently happiness of the wretched souls we sought to help—’
‘And distinctly dispassionate towards her own husband who spent years trying to wring some feeling from her cold, cold heart, Mama, after she turned out to be so completely different from the woman James thought he married!’
‘Don’t you raise your voice at me, girl! You are in no position to criticise Hortense. What you did to her—’
‘She brought it upon herself, Mama!’ Blessed relief it was to answer back. Strange how Adelaide felt so much stronger in the face of a confrontation she’d imagined would sap her of all she had. ‘If Hortense had offered a little kindness James would have responded like the good man he was. His finely tuned sensibilities required—’
‘Too rich by half, Adelaide! Finely tuned sensibilities, indeed! He was a grubby adulterer and your vanity was aroused by his poems of love and longing. Where were your finer feelings of loyalty towards your mother? Towards Hortense who laboured at my side while you thought of nothing more important than the impact of your copper locks on potential suitors or whether your dress was in the first stare? You destroyed everything good in Hortense’s life’—her mother sucked in a heaving breath—‘and in mine, too.’ She was close to tears. ‘But you speak the truth, Adelaide. Hortense was the daughter I should have had, but you poisoned the love between us and destroyed her marriage. And who salvaged a future for you?’
Adelaide was still trembling from this violently passionate exchange when they drew up in front of the house. Tristan was there to help her out of the carriage, clearly shocked when he held her.
‘You’re not well, Adelaide. Why, you’re trembling all over. I’ll take you to your room.’ Scooping her into his arms while one of the servants tended to his mother-in-law, he carried her up the stairs.
‘I’m perfectly alright,’ Adelaide protested, nevertheless enjoying the close proximity. She was pleased to note that Tristan’s limp was not so much in evidence today, so she simply rested her head on his shoulder and allowed herself to enjoy feeling safe and protected. She breathed in the comforting familiar smell of him: horses and nutmeg and fine port. He was an Englishman through and through. Solid and dependable. Just what a flighty girl like herself needed, she told herself firmly as she pushed all thoughts of James from her mind.
Preorder at The Book Depository
Amazon 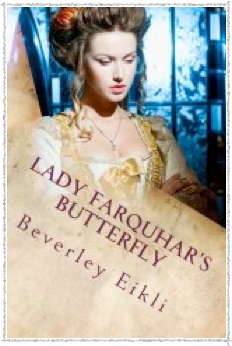 Lady Farquhar's Butterfly is available in hardcover, Large Print, ebook and in paperback

The beautiful widow, Olivia, Lady Farquhar, accepts that her sullied reputation bars her from polite society.  She won't accept, however, the terms of her vengeful late husband's will which deny her the right to bring up their son, Julian.
Concealing her identity in order to reclaim Julian, Olivia unexpectedly finds love with the boy's kind and gentle guardian, Max. But happiness is fleeting as Olivia's past returns to haunt her.
Blackmailed into a union with her late husband's religious confessor, Olivia faces a loveless future.
For how can she reveal to Max that she has unwittingly denied him his birthright?

Long and Short Reviews - 4 1/2 Stars
"Sweet with heat and hard to beat, Lady Farquhar's Butterfly gains momentum as it builds to a terrifying climax....
Beverley Eikli’s concise, smooth, and subtle writing reveals characters and their motivations with a style that makes Lady Farquhar's Butterfly fascinating—a thoroughly enjoyable, page-turner of a tale."
RED ROSES FOR AUTHORS gave me 5 Stars and a Red Roses for Authors award. 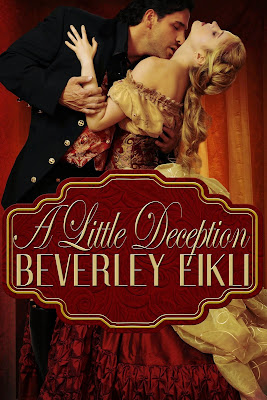 When loyal and determined Rose Chesterfield persuades London’s most eligible rake not to call in a debt that would ruin her family, she never expected marriage.Guilty of an innocent deception to win the heart of the man who’d intended to make her his mistress, Rose is determined to prove her worth to her new husband.But her beautiful, scheming sister-in-law Helena is intent on branding Rose an adulterous diamond thief. Will Rose succeed in persuading society – and her husband – that the truth is not what it appears?Shortlisted Favourite Historical of 2011 by ARRA (Australian Romance Readers Association).


A revised 2013 version of A Little Deception, originally published by Robert Hale, is now available as an e-book and in Large Print.
Apple iTunes
Barnes & Noble
Kobo
Amazon.com
Amazon.uk
Smashwords 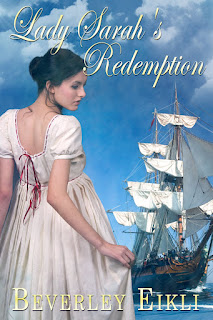 When spoiled heiress Lady Sarah Miles assumes the identity of a drowned governess to escape marriage to her best friend, James, she thinks her troubles will be over within the fortnight.

Arriving at the grand estate of reformist MP Roland Hawthorne to take charge of the tortured widower's rebellious sixteen-year-old daughter, Caro, Sarah soon finds herself in love with the occupants of her new household.
But when Sarah’s deceit plays into the hands of an unexpected adversary who uses Caro as a pawn in a high stakes game of revenge, Sarah must risk everything she holds dear - including her love for Roland - to redeem herself.