Dubious start to the New Year

Yes, my girls went back to school today, except I thought it was tomorrow. I messaged a friend to suggest we meet in the park and she immediately phoned to say the kids were due to start school in half an hour

As I consoled a rather distressed seven-year-old, at least she didn't have an extra day in which to stew over the scariness of becoming a grade 2.

And yes, we did get there in time, even if the school shoes weren't polished and the collars not ironed.
Posted by Beverley Eikli aka Beverley Oakley at 6:43 PM No comments:

Monday is the start of my blog tour to promote my newly rewritten Regency Romantic Intrigue, A Little Deception by Beverley Eikli. 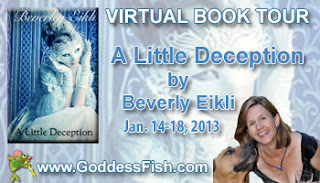 It was shortlisted for an Australian Romance Readers' Award in 2011 in the Favourite Historical Category. After I got my rights back earlier this year I rewrote the book and changed the ending and I just adore my exceptionally beautiful, utterly ruthless villainess, Helena. She's the sister-in-law to my enterprising and honourable heroine, Rose.

You can find me here, talking about my writing process, inspiration and romance apprenticeship:

The cool thing is that this is the second year running my books with really villainous villains have been short-listed.

This times it's Lord Slyther, the hideous, foul-breathed, wart-covered and gout-ridden suitor of my fiesty heroine, Fanny Brightwell in Rake's Honour by Beverley Oakley who has won his day in the sun.
Posted by Beverley Eikli aka Beverley Oakley at 8:25 PM No comments:

Hooray! I'm a finalist for an ARR (Australian Romance Readers)  award for my Regency Historical, Rake's Honour written under my Beverley Oakley name.

I'm in illustrious company. Read the full list of categories and nominations here.

Posted by Beverley Eikli aka Beverley Oakley at 5:10 PM No comments:

Hot Down Under Release Day

Saving Grace, my 10K story, was a pleasure to write as it combines so many themes and elements which fascinate me. Set during the early years of photography it's about a rich man's hobby which becomes a poor girl's road to ruin.
Below is the blurb, followed by a brief run-down of all the stories which can be downloaded at Amazon.
Saving Grace by Beverley Oakley.
It’s 1878 and London’s most beautiful and hard-hearted prostitute, Grace Fortune, is preparing for her next job. She’s the special initiation ‘gift’ procured by a mother in fashionable Mayfair for her son’s twenty-first birthday. When Grace discovers she is to be servicing the man whose secret she’d guarded at the cost of her once-secure position as a housemaid and whose betrayal has plunged her into this hated life, she wants revenge. That is, until the re-emergence of malevolent forces that destroyed the couple’s young love. Now David and Grace must reconcile the past and fight for a different kind of justice to salvage their dignity and find happiness.

Business with Pleasure by Keziah Hill

For sculptor Lottie Williams, entering her sculpture, Triumvirate, in the Carve the Wind exhibition is the culmination of her career.
What she doesn’t count on is the incendiary lust between her and the curators, James and Magda. While she’s at first happy to play, she rapidly gets out of her depth when she confuses business with pleasure. Against the wild backdrop of the Pacific Ocean her work is displayed to great acclaim.
But all she wants, all she can think about is being back in the bed of the two people who have laid claim to her heart and soul.
This story is rated "Very Hot" (5 out of 5 flames) and contains F/F/M pairings.

Midsummers Eve by Shona Husk.
When Zoe walked out on the dare-devil photographer Sam Lincoln she never expected to see him again. Now he is here covering the reopening of a winery that nearly burned down, the one where they’d planned to marry. Seeing Zoe is a shock. Five years ago Sam hadn’t been able to refuse the job of a lifetime, but in exchange he lost the love of his life. With a little help from the winery’s lusty patron spirit Zoe and Sam might be able to put the past aside and rekindle what they’d thought lost.

Hidden Passions by Marianne Theresa.
When a guy falls in love with a mate’s girl, there is only one thing he can do … leave town. When Chad Whittaker receives a frantic call for help from the woman he loves he’s on the next plane home to Sydney. But will he get there in time? Cally Foster just kicked her boyfriend’s no-good, lying, cheating ass out of her apartment and her life. That’s what a girl gets when she falls for the wrong guy.

Powerplay by Lexxie Couper.
Sam and Nicky White are a typical contemporary power couple. She’s a ball-busting vice president at the country’s leading bank, he’s the trophy husband she wears on her arm at executive dinners. Except when they are in the bedroom. In the bedroom, their “games” of sexual domination have Sam firmly in the position of power. Nicky, however, is ready to bring the game to an end but Sam has other ideas. During a night of domination and submission in their isolated country cottage, an unexpected guest drops in on the couple. A dangerous guest. And for Sam and Nicky, nothing will ever be the same again.

Posted by Beverley Eikli aka Beverley Oakley at 2:42 AM 2 comments: