What would I do without critique partners? I thought I'd whip up a 10K piece for the Aussie gals' anthology and yes, I managed a first draft in five days of hurling myself at the computer between the washing up and story time. I'd been pot boiling this story for months and it was destined to be about a 50K novella. However, the bones of the story lent itself to a poignant reunion story with each partner of the now dissolved couple believing the other guilty of a betrayal which had sent them on a downwards spiral until their unexpected meeting.

Essentially, the story is only two scenes and there's a lot of emotion to incorporate which must be laid bare without backstory getting in the way. Yet back story is essential. It's what ups the pace and makes the reader keep turning the page asking, 'But why...?" I think that's where my true love lies: perfecting that page-turning response, upping the ante and feeding in tiny snippets of backstory to create suspense.

However, it's my brilliant critique partners, Jess Dee, Bernie and Frances who give me the honest low down on where there's too much of it - the dreaded backstory! - and not enough emotion.

I'm on the home stretch now. Just a few more hours and I'll have it nailed. But my dreams of uninterrupted writing hours to get it done today are just that:  I have school volunteer reading for my 6-year-old's class and my Vic Uni Short Story class to teach.

Anyway, here's to those great gals who tell me the unglossed truth and inspire me with their feedback which helps me always to 'make it better'.

I'll get there soon!
Posted by Beverley Eikli aka Beverley Oakley at 4:08 PM No comments:

Living in a Parallel Universe

It's so good that Eivind is now more than half way through his command upgrade. If all goes to plan I can start calling him Captain Darling in May or June.

Yesterday he had Sessions 4 & 5 in the simulator which is exactly the same as the cockpit of the 737 except that it's... a simulator. An exhausting session from all accounts as they were loaded up with multiple engine failures, unruly passengers, bad weather, two alternate airports that couldn't be used due to closed runways and storms and faulty flaps.

I told him we had more in common than he realised. In the simulator he's acting out a fantasy in a parallel universe so he can save passenger lives while I'm doing the same thing at my computer.
Posted by Beverley Eikli aka Beverley Oakley at 3:12 PM No comments:

Email ThisBlogThis!Share to TwitterShare to FacebookShare to Pinterest
Labels: 737, parallel universe, simulator
What a beautiful day - even though I haven't had a glass of wine and the kids have put sticky fingers on my keyboard.

It's the last weekend before the school holidays so with a lovely little friend to amuse the girls I got half way through the novella I'm submitting for an anthology to be published by a group of Australian writers.

If it doesn't make the cut I'll see if my lovely TEB editor, Rebecca, likes it. It's 8000 words with a twist in the tail... haven't got to the end but I've spent enough hours pot-boiling it so I think it'll work out.

Busy, busy on other things, mainly promo. I'm part of the Web hunt at Night Owl Reviews and I'm also building up my Beverley Oakley Facebook page. Have a look and give me suggestions as to how to improve it. I'm learning on the hoof!

Posted by Beverley Eikli aka Beverley Oakley at 1:10 AM No comments: 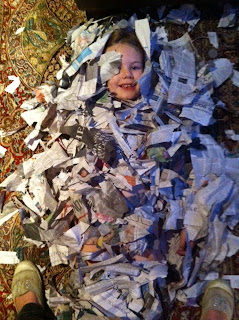 School holidays means hard work
School holidays are always challenging as one tries to balance the necessary entertainment of kids with the self-imposed or very real spectre of advancing deadlines. Fortunately I really believe I'll get my latest novella off to Ellora's Cave by the end of tomorrow.

In the meantime my wild six-year-old is shredding the Saturday papers into tiny pieces. I'm sure she's going to ask if she can set fire to them, next, as I made the mistake of recounting my blissful childhood when I had my own fire pit at the bottom of our garden in Adelaide, South Australia, where I concocted various witches' brews in an old three cornered pot my mother tossed my way.

However, as we've had rain, hail and generally freezing weather I might be off the hook. Its just gets so tiring being the parent who always says 'no' when the other one is always away, flying. Eivind assures me the full-on commitment required by his 737 command upgrade is not representative of the usual pattern and that he can bid for a more family-friendly roster and I do believe him and am supportive. My 18 years as a trailing spouse in twelve countries has equipped me for odd hours, such as regular two months away and one month at home during his survey job, or four months away when he flew in Antarctica.

That said, I loved turning the tables and being the one to take a two-month contract in Sweden, pre-kids, while he stayed at home when he was chief pilot of the airborne geophysical survey company we both worked for. I wanted the job - for both the excitement and the novelty of being away (as well as the money) - but I also wanted him to know that it can be plain drudgery simply keeping the house in order in the domestic sphere. Of those two months I have very happy memories of gathering blueberries by the lake at the resort where the crew was stationed and going to nightclubs in the Arctic circle town of Arvidsjaur. I doubt Eivind remembers much of his time spent making solo meals and doing the washing.

So now I've pandered to my daughter's whims and generally been the good parent - with an interlude drinking wine with my sister who is also married to a Norwegian pilot she met in Botswana, like me. While the four kids ran around we had a great time discussing family dysfunctionality and the difficulty of being appreciated as a returning mother to the workforce with disparate world-wide work experience.

That said, it's now time to get the girls to bed, print out my 54,000 word novel about star-crossed lovers involving an older woman and a younger man, and go to bed.

But first I must check the electronic diary to see when my lovely husband is home so I can prepare a nice dinner to reflect my understanding that his stress levels in the hot seat are high.

Being the wife of a shift-worker requires a broad level of skills including frustration-free nurturing, understanding, appreciation and good old fashioned appreciation.

Posted by Beverley Eikli aka Beverley Oakley at 3:02 AM No comments:

There's a fun competition happening over at Night Owl Reviews -

http://www.nightowlreviews.com/nor/Pages/springflingdetails.aspx - with lots of prizes on offer, including a copy of my recent release, Rake's Honour.

Meanwhile, I'm going to enjoy today's beautiful weather finishing my work in progress while the girls have gone off to the beach with their friends - two lovely brothers aged 7 and 9 who each gave my girls 'Secret admirer' Valentine's Day Cards and 6 little chocolate seashells. Sophie and Lillie were so excited.

My lovely husband is returning today, also. His hectic flying schedule as he completes his command upgrade on the 737 (commuting out of Sydney) means I'm always checking the electronic diary to see if he'll be home that night so I should organise something a bit nicer than usual for dinner.

Posted by Beverley Eikli aka Beverley Oakley at 5:28 PM No comments: